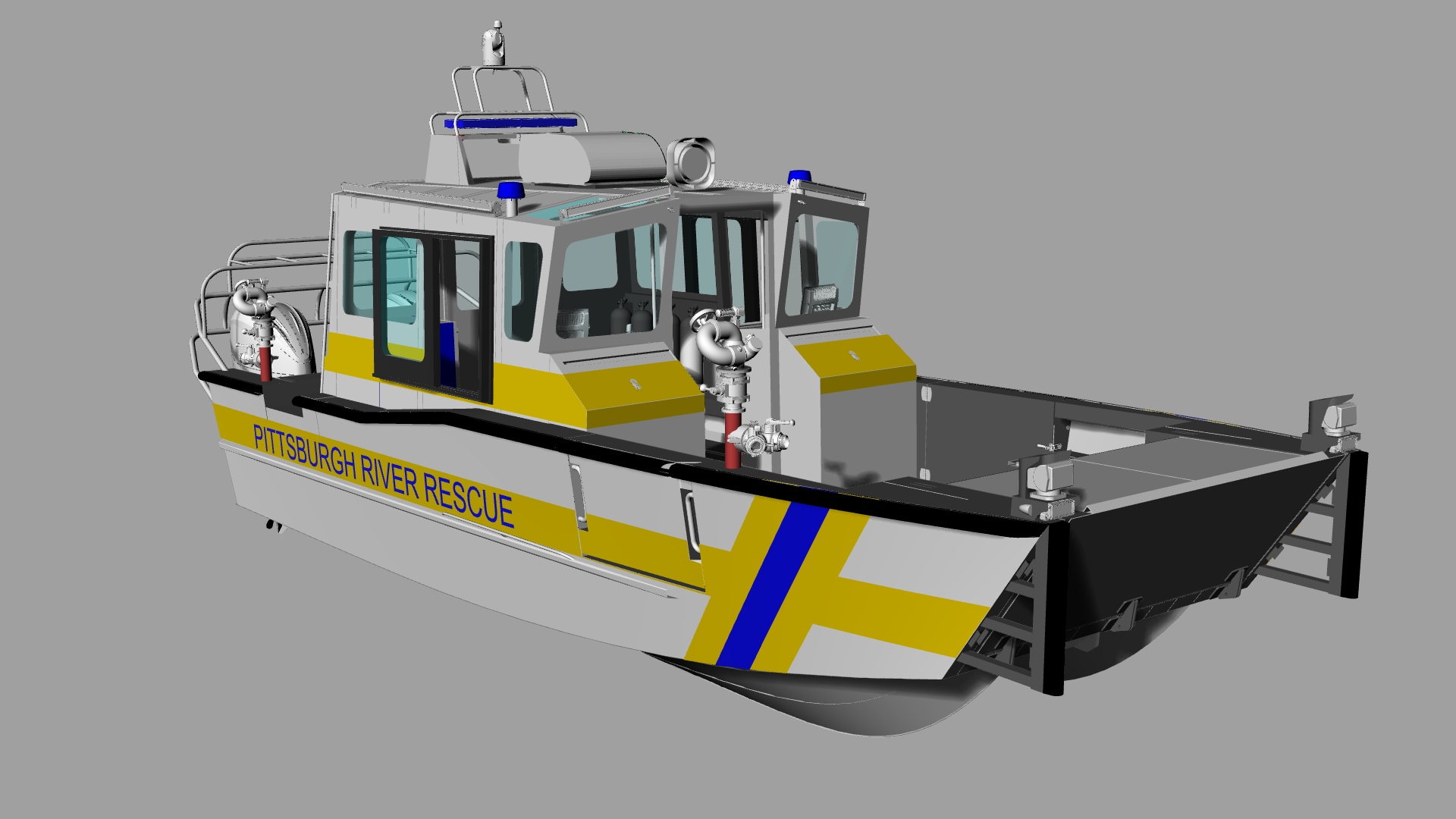 The vessel will be among Lake Assault Boats’ most powerful rescue boat in its history.

“This is our second craft for the City of Pittsburgh in the past three years, and we’re thrilled to receive this vote of confidence from a city known for its vital waterways and iconic riverfront,” said Chad DuMars, Lake Assault Boats vice president of operations. “This custom craft features fast response combined with a full toolbox of capabilities to address a wide range of emergency scenarios.”

The boat’s Catamaran style hull is engineered for enhanced stability and maneuverability, and it is powered by two state-of-the-art Yamaha 425 hp outboard engines for maximum response time. Slow speed maneuvering is controlled by Yamaha’s Helm Master joystick steering and digital anchoring system. The vessel features a 74” hydraulically operated bow door, a heated front deck, dive step cutouts; and it can deploy a SWAT team and its equipment, including an ATV vehicle.

“This new rescue vessel will respond to just about any emergency – from a medical situation on a river cruise ship, to a SWAT team’s mission or a fire on a fishing boat,“ said Division Chief Raymond S. Everitt, a 35-year veteran of the Pittsburgh Bureau of Fire. “In addition, our Unit participates in several mutual aid agreements and there are times we’ll need to travel long distances. The craft’s 45 mph estimated top speed will greatly improve our response time.”

The boat carries an ALS squad on board and is equipped with the same medical gear found on a traditional ambulance. Its 10-foot long, fully enclosed pilothouse has an 80-inch interior clearance height, with ample room to treat patients in space protected from the elements. There is an operator’s captain seat with storage below, additional bench seating, and numerous storage compartments. The helm station features integrated fire pump controls and an overhead radio rack. The craft will carry a full spectrum of electronics, including chart plotter, HD radar, sonar, and a forward looking infrared (FLIR) system, all controlled through two Garmin touchscreens.

For firefighting operations, the boat is outfitted with a Darley 750 gpm fire pump (stored in a recessed deck compartment) with through-hull suction into a sea chest, and an Elkhart deck monitor and nozzle. Other notable features include a full complement of LED floodlights, warning lights, and spotlights; a hinged radar arch; and an SCBA dive bottle rack.

The Pittsburgh River Rescue Unit combines the efforts of the Bureau of Emergency Medical Services’ SCUBA Search & Rescue Team with those of the Bureau of Police River Patrol. The Paramedics who staff the River Rescue Units are responsible for water rescue, and for administering ALS emergency medical care. The Police Officers assigned to River Rescue are responsible for piloting the various water rescue craft as well as for enforcing Pennsylvania Fish & Boat Codes. The Unit also provides assistance to the largest number of registered recreational boats in Pennsylvania as well as security for the nation’s second largest inland port.